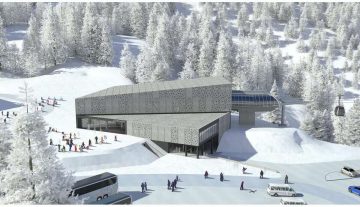 Apparent Go Ahead For One of World’s Longest Ski Lifts

It appears that a huge lift project talked about for decades now has finance secured and will finally be built, with a 2025 opening date given. The ‘Funiflaine’ lift which envisages a lift up from the valley floor to the Flaine ski resort has been talked about for about as long as the nearly 60 years the resort has existed. In the early 2000s a serious study in to the realities of such a lift was commissioned and the project was revisited around 2009, but the project has never got off the ground primarily because it fell short of a perceived cost/benefit ratio …up to now. Now though, climate change concerns seem to be behind the project finally getting the

Many skiers enjoy moguls and fast icy pistes but for off-piste skiers and free-ride snowboarders, fresh snow starts to deteriorate from the moment it settles. Wind, rain and periods of above-freezing temperature are the primary cause of the evolution from fresh powder to windslab, ice or slush. High altitude slopes that are shaded from the sun and sheltered from the wind preserve powder stashes longer after fresh snowfall. If the snow report mentions pockets of powder at Nevados de Chillan, study the Nevados de Chillan piste map in relation to the wind direction to determine the most likely locations.