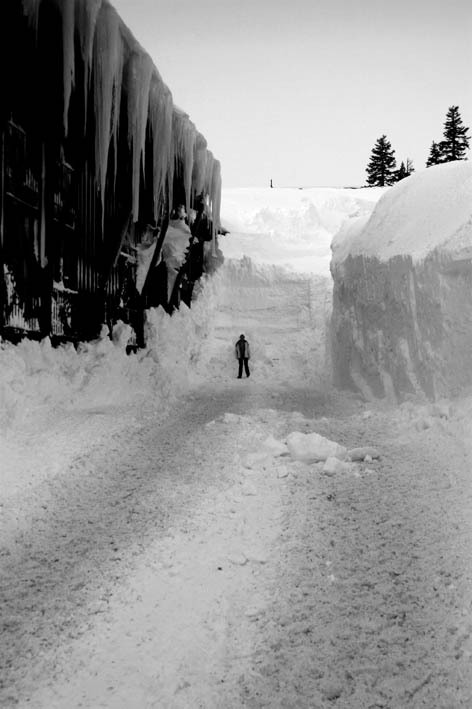 A small part of Paris has been lending a hand on the slopes of Mt Hutt in New Zealand this week. A replica of Rodin’s famous bronze statue ‘The Thinker’ has made his debut on various parts of the Canterbury ski field. The statue’s presence is part of the country’s comprehensive ACC injury prevention campaign which is a government-backed programme that ensures everyone in New Zealand is covered by a no-fault scheme if they've been injured in an accident. Over the past six years ACC have accepted 6,595 snow-sports related injuries in the Canterbury region alone. The idea of ‘The Thinker’, part of ACC’s Preventable campaign, is to encourage skiers and boarders to think before they act and help prevent

Mammoth is a mountain of extremes, both good and bad. It covers a huge area with multiple exposures, but the terrain basically breaks down into mostly super-steep snowfields above mid station and easy, rolling tree lined trails below midstation. Consequently, most runs fall in the 1200-1300 vertical foot range.
It gets lots of snow in big dumps, but the fresh stuff gets skied out quickly because there are so many people on the hill and so many high capacity lifts. Another negative is the powerful SoCal sun and proximity to the desert, which softens the snow surface quicker than the resorts in Colorado, Utah and even Tahoe. As a result, a groomed piste gets skied up quickly and the snow surface can get choppy by early afternoon. However, the snow on the upper mountain is protected from the sun and it usually is colder and drier up there…so the steep runs off the gondola almost always have great snow.

The mountain hasn’t expanded since the 1980’s but nearly all the double chairs have been replaced with fast quads. Lines are not a problem but crowded slopes are very much a problem on weekends. On-mountain dining is sub-par for a destination resort. Best option is to ski over to the Mammoth Mountain Inn.

Lodging in town is mostly mediocre motels. There is a high-end Westin that’s nice, but has commensurately high prices. I am a fan of the 1950’s era Mammoth Mountain Inn, which is slopeside and offers decent prices.

Bottom line: Mammoth has some of the best steep snowfields in the country. But it’s still an LA weekend escape resort. There are better choices if you are l traveling cross country looking for a destination resort.

The Mammoth Mountain skiing weather widget is available to embed on external websites free of charge. It provides a daily summary of our Mammoth Mountain snow forecast and current weather conditions. Simply go to the feed configuration page and follow the 3 simple steps to grab the custom html code snippet and paste it into your own site. You can choose the snow forecast elevation (summit, mid-mountain or bottom lift) and metric/imperial units for the snow forecast feed to suit your own website…. Нажмите здесь, чтобы получить код для HTML-страницы.